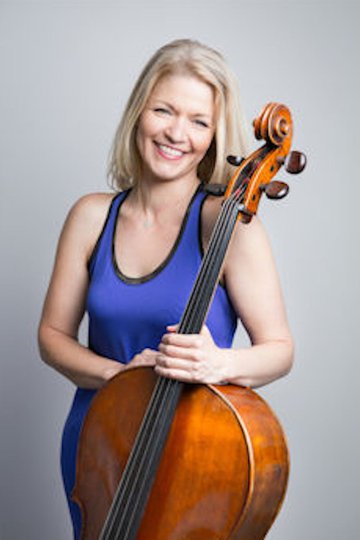 Described by the legendary Janos Starker as “a cellist of the highest standard who will play an important part in musical life”, Kalina was born in Sofia into a family of cellists, and from a young age regularly performed as a soloist with all the Bulgarian Orchestras, winning numerous competitions and prizes including The French Academy of Arts “Young Talent Award” and 1st Prize at the International Music and the Earth Competition.

Her recordings for the “Gega New” label include Schuman and Elgar Cello concertos with the Bulgarian National Radio, available on Amazon. Chamber music activities have included concerts with Yo-Yo Ma, Yuri Bashmet, Misha Maisky and Roger Chase, and she now plays in a string trio with violinist Roy Theaker and the viola player Simon Oswell. Kalina is a member of Trio Cellissimo and CellOZ Quartet.

She was for a five years Principal Cello of the Orquestra do Algarve in Portugal, and since moving to Melbourne in 2009 regularly works as a Guest Principal with Orchestra Victoria and as a casual with the Melbourne Symphony Orchestra. She teaches cello and chamber music at the Melbourne Conservatorium of Music and Monash University.

Kalina Krusteva holds a PhD from Sofia National Academy of Music. She studied with her father, Anatoli Krastev, and had masterclasses with Janos Starker, Stephen Isserlis, Robert Cohen and Raphael Wallfisch before completing a postgraduate and teaching degree at the Royal Academy of Music, London, after which she worked with many of the major UK and Irish orchestras: the Royal Philharmonic, the Academy of St.Martin-in-the-Fields and the Irish Chamber Orchestra. She was Principal Cello of the London Schubert Players and the Russian Chamber Orchestra of London, and she was Co-Principal Cello of Valery Gergiev’s "World Orchestra for Peace" at the Royal Albert Hall during the Proms Festival.

Kalina plays on a Romeo Antoniazzi made in Cremona, 1903.