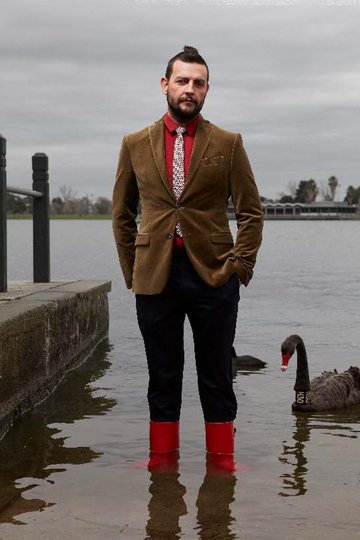 Born at a very young age, Christopher Moore’s formative years were shaped by the rich amateur choral scene in Newcastle. His mother played the organ at their local Catholic church and has sung in the University of Newcastle Choir since its inception in 1977.

Acclaimed worldwide for his musicianship, Christopher enjoys a distinguished career as a orchestral and chamber musician, soloist and teacher. He is currently the Principal Viola of the Melbourne Symphony Orchestra and is in demand as a principal player with the Sydney, Adelaide, Perth, Melbourne, Queensland, Tasmanian and New Zealand Symphony orchestras, Australian World Orchestra and the Orchestra Ensemble Kanazawa, Japan. He was the Principal Viola of the Australian Chamber Orchestra for ten years and appears regularly with them as Guest Principal Viola. Being a half-decent viola player means that Christopher is in high demand as a chamber musician around the country and overseas. This all leaves very little time for the losing battle between himself and the little land mines his miniature pinscher leaves in the back yard!

The family recently purchased a van to transport the many instruments that are played by his talented family. His wife Jill plays double bass, piano, electric bass and ukulele; Isabella plays upright and electric bass; and Dorothea plays piano and cello. They all play kazoo when the necessity arises. Christopher also plays theremin ... and if you don’t know what that is, just ask him (here’s a hint: he hasn’t touched it for years).

In 2023 he will be directing a program with acclaimed jazz pianist Paul Grabowsky and members of the Melbourne Symphony, and another program featuring Mary Finsterer’s works. He recently appeared as soloist with the MSO and their Chief Conductor Jamie Martin in Berlioz’s Harold in Italy.

Christopher is fortunate enough to be able to play a 1610 Giovanni Paolo Maggini viola, kindly on loan from an anonymous benefactor. He also owns a wonderful 1937 Arthur E. Smith viola currently being fought over by William Clark and Fiona Sargeant in the MSO.